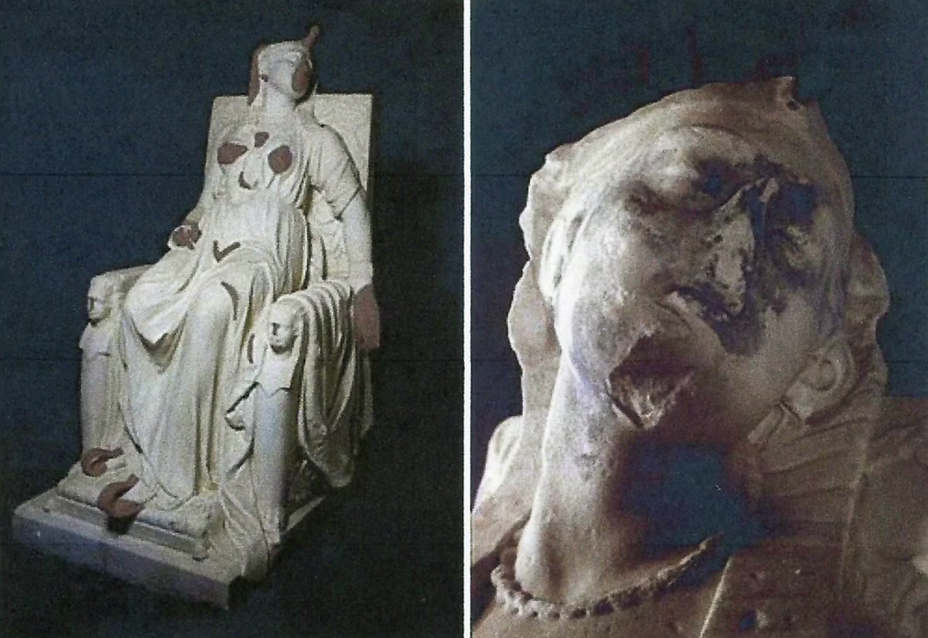 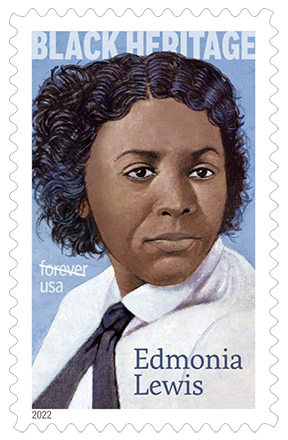 ​In 2022 Edmonia Lewis was honored by the United States Postal Service (USPS) with a stamp featuring her portrait painted by Alex Bostic. In a statement, the USPS said: “As the public continues to discover the beautiful subtleties of Lewis’s work, scholars will further interpret her role in American art and the ways she explored, affirmed or de-emphasized her complex cultural identity to meet or expand the artistic expectations of her day." 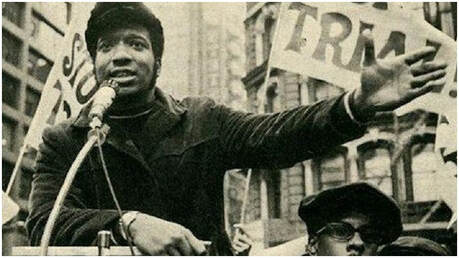 Fred Hampton was born in Chicago on August 30, 1948 and his family moved to Maywood, IL when he was ten. He attended Proviso East High School where he gained early experience in organizing. Seeing that Black students had few options if they were struggling academically, he worked to provide more counseling resources. He pushed for adding more Black teachers to the faculty and administration, and his efforts were successful. Because only white girls were allowed to run for Homecoming Queen, he organized a boycott of the Homecoming Dance and a student walkout, The result was the election of the school’s first black Homecoming Queen. He was a gifted and persuasive speaker and well-liked by both teachers and students. He graduated high school with honors.

He studied pre-law at Triton Community College and became active in the NAACP, leading the West Suburban branch of their Youth Council and increasing their membership to over 500 members.

Hampton joined the Black Panther Party and moved to Chicago, where his leadership, charisma, and speaking skills quickly became apparent. Hampton formed the “Rainbow Coalition,” a group comprised of the Black Panthers, the Young Patriots, the Young Lords, and Chicago street gangs. He led them to stop infighting and work together for social change.

Hampton rose to head up the Illinois chapter of the Black Panther Party, organizing rallies and coordinating with the People’s Clinic and the Free Breakfast Program. He soon attracted the attention of the FBI’s illegal surveillance program COINTELPRO, whose goal was to infiltrate, discredit, and disrupt leftist American political organizations. The FBI hired a criminal informant, William O’Neal, to infiltrate the Black Panther Party and win Hampton’s confidence. O’Neal became Fred Hampton’s bodyguard and helped create rifts between the parties of the Rainbow Coalition that Hampton had built.

On December 3, 1969, O’Neal slipped Hampton a strong sleeping drug into his drink and then left the apartment. That night officers raided Hampton’s apartment and opened fire while he and his pregnant fiancée were asleep. Police fired 99 shots while the Panthers only shot twice. After finding that Hampton was still alive, one of the officers shot him twice in the head and killed him. Mark Clark, who was present as a bodyguard, was also killed.
​
Shortly after, a break-in at an FBI field office in Philadelphia brought to light FBI plans to assassinate Hampton. In 1970 Hampton’s family sued for $47.7 million in a civil rights case. In 1982, Cook County and the U.S. government agreed to a settlement of $1.85 million.
Sources:
National Archives: https://www.archives.gov/research/african-americans/individuals/fred-hampton#:~:text=Fred%20Hampton,law%20at%20Triton%20Junior%20College.

Howard Zinn: A People’s History of the United States

(1919-1994)
Ashes Scattered in Forest Home Cemetery
Burroughs was born in Brooklyn, NY and in 1928 his mother Williana, a teacher and member of the CPUSA, took her two sons to the Soviet Union. There they remained through secondary school. He became an apprentice toolmaker and later worked for the Soviet circus. Known as "Charley," he was fluent in Russian and a scholar of the great Russian poet and writer Pushkin. He loved reciting Pushkin in his gravely base voice. In 1945, he was drafted into WWII. He returned to the U.S. and graduated from Roosevelt University in American history.
Charley moved to Chicago and married Margaret Goss, a school teacher. In 1961, he and Margaret Burroughs founded the DuSable Museum of African-American History in the living and dining room of their home. He served as the Museum's first curator. In 1973 the DuSable Museum moved to its permanent home in Washington Park, in Chicago's South Side. Charles is author of 2 books of poetry; Home and More Poems.

Hansbrough was an African-American steel worker on Chicago's south side. In the 1930's and 1940's he became a leader of the CPUSA and prominent figure in the campaigns to free the Scottsboro Nine (nine young African- American men who were framed on rape charges in Alabama in 1931) and Angelo Herndon (a Black youth framed on "insurrection" charges in Atlanta in1932 while organizing for food relief); all victims of an unjust and racist judicial system. Hansbrough was also active in the left wing cultural movement of that era, particularly in art and drama.
In the 1940's, Hansbrough moved to New York City, where he helped provide leadership to the CPUSA's Black Liberation Commission. Hansbrough was married to Amelia Ferguson, a civil rights leader. 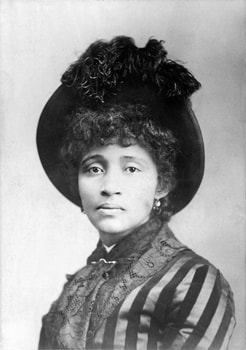 A staunch fighter for militant industrial unionism, full equality of women, and an end to racial discrimination, Lucy Parsons is a major figure in Chicago and U.S. Labor history. She was born Lucy Gonzales in Johnson County, Texas and was of African-American, Mexican, and Native American ancestry. She and her husband, Albert Parsons (of the Haymarket Eight), met in Texas and later moved to Chicago in 1873. They became active in many labor and civil rights causes, and joined the Socialist Labor Party in 1877.

Lucy was an active publicist for the cause of socialism, and later anarchism. She was a leading writer for The Alarm and an excellent public speaker. She and Albert were leaders of the "Poor People's March" in 1884 to protest hunger and homelessness, and led the May 1, 1886 march of over the 80,000 workers who were demanding an 8-hour day. When Albert and the other Haymarket activists were arrested, Lucy made a cross-country speaking tour to enlist support for their release.

After Albert's execution, Lucy remained in the thick of the struggle for social justice and equality. She was a founding member of the IWW in 1905. On January 17, 1915 Lucy led an 'Unemployed Parade' up Halsted Street in front of the Hull House, where a new song was sung: "Solidarity Forever." Lucy was a familiar sight at every major workers' march and rally in the 1930's and early 1940's. For the last 15 years of her life she was a member of the CPUSA.
​
From 1910 to the time of her death, Lucy Parsons lived with activist George Markstall. In 1942, her house caught fire and she perished in the blaze. Markstall's ashes along with those of Albert Parsons, Jr. (son) are interred in the grave of Lucy Parsons. No information regarding Albert Parsons, Jr.'s interment exists in Cemetery records

​Lightfoot was an outstanding figure in Chicago's African-American community. Born in Mississippi, she came to Chicago as a child. By the 1930's she had emerged as one of the garment industry's top organizers, particularly among the women on the west and south sides.
​
Geraldine married Claude Lightfoot, for many years a leading member of the CPUSA. She worked closely with Claude in left-wing politics until the 1950's when she developed a brain tumor.
When stricken, Geraldine was initially refused treatment in a Chicago hospital by a right-wing German refugee doctors who despised her political views. The hospital's director later apologized for this gross violation of the Hippocratic Oath. Geraldine succumbed to the cancer in 1962. 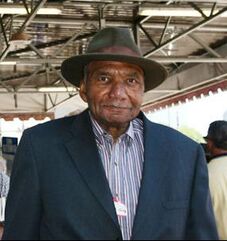 Frank Lumpkin was born 1916 in Washington, Georgia. He was one of ten children in an African-American sharecropper family. Boll weevils ate their cotton, forcing the family to move to Orlando, Florida to work in the orange groves. In Florida, Frank began boxing professionally.

Moving to Buffalo, N.Y. in 1940, Frank worked at Bethlehem Steel and was honored by the United Steel Workers in 2003 with the Steel Union Pioneer award. In 1943, Lumpkin joined the Merchant Marine to help win the war against fascism and became a steward for the National Maritime Union. It was in Buffalo that Frank, his sister and mother became leaders of the CPUSA. After the War, Frank became a leader of the Buffalo civil rights movement.

​In 1949, Frank married trade unionist Beatrice Shapiro in their new city of Chicago. In 1980, Frank came to public attention as the leader of Chicago's Wisconsin steel workers, when the mill closed without notice, cheating 3400 workers out of paychecks, pensions and benefits. Lumpkin, a rank and file worker, led a victorious 17-year fight for justice, forcing the steel companies to pay about $19 million to the workers. In 1987 Frank Lumpkin was elected as the Illinois Chairperson of the CPUSA. 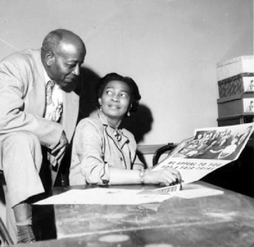 ​Perry, an African-American worker, never obtained more than a third grade education. He taught himself to read and write, however, and soon emerged as a working-class leader in the Los Angeles area in the early 1930s. He joined the CPUSA about that time, and was an active fighter for the freedom of the Scottsboro Nine in Alabama. Long before the civil rights movement, Perry wrote a pioneering pamphlet called Negro Representation. He later moved to New York City where he served as head of the CPUSA's Black Liberation Commission.

​During the McCarthy period, he was one of a few of the CP leaders that did not go underground. He served on the 3 person "Administrative Committee" that ran the day-to-day activities of the CPUSA. Perry served three years in prison under the Smith Act. 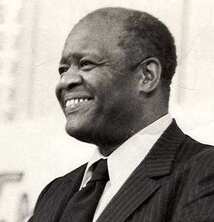 Born in Hattiesburg, Mississippi, Henry Winston was drawn in his teenage years to the struggles of the unemployed in Kansas City, Missouri, where his family had moved in search of work. Winston quickly rose to be a leader of the militant Unemployed Councils. He joined the YCL in 1931, and soon became one of its most outstanding African-American leaders, becoming the National Organizational Secretary of the YCL. He later helped found the Southern Negro Youth Congress.

In 1946, Winston became organizational secretary of the CPUSA and, in 1948, was among the twelve CPUSA leaders indicted under the Smith Act. Convicted in 1949, Winston was eventually imprisoned in Terre Haute, Indiana, where his deteriorating health—caused by a brain tumor—was criminally neglected by the authorities. Surgery came too late; he lost his eyesight. Winton's spirit, however, was unbroken.

​Upon his release from prison in 1961 he remarked, "My sight is gone but my vision remains."
He became national chairman of the CPUSA in 1966, a position he held until his death. Winston led the campaign to save the life of Angela Davis in the 1970s, and was a pioneering figure in the anti-apartheid movement. He wrote two books, Strategy for a Black Agenda and Class, and Race and Black Liberation.

Hope of Juneteenth from buzz McBride on Vimeo.