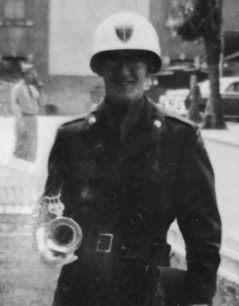 Don was born was born July 14, 1931 in Fulton Illinois, along the Mississippi River. He has lived in Forest Park since 1967. Don was drafted at age 20 and served in the U.S. Army from 1952-1954 during the Korean War. He took his 16-week infantry basic training at Fort Riley, Kansas. During his time at Fort Riley, Don learned that there was a band school and  inquired about it.  Don played the cornet in high school and wanted to see if he could get involved with the band school after basic training. His sergeant encouraged him to inquire. Don soon learned that the band school needed more cornet players and it was arranged that Don would attend following completion of his basic training.  After Don finished Fort Riley band school, he was sent to Fort Sam Houston 4th Army Area to be assigned to a military band. Plans were changed and Don was sent to Camp Polk, Louisiana for about 6 weeks when orders came down that more musicians were wanted in Europe.  Don and a couple of other men who played different instruments were chosen to go to Camp Kilmer in New York to board a boat bound for Europe. After being on the boat for quite some time and sick most of the time, Don landed in Hamburg, Germany. The group was then transferred to another band school in Munich, Germany  where they spent the next four months. Following Munich, Don was assigned to the 76th Army Band in Orleans, France from June of 1953 to March of 1954. Don’s band played daily in Orleans giving concerts in the morning and playing for different situations related to military ceremonies and European dignitaries. The band also played a few times in Paris. When that time was up, he was sent back to the U.S. to be discharged. Don felt that he contributed to the military with his musical abilities and was happy to do so. Although he never served in the combat that was part of the Korean War, Don states that some of his friends who served in combat in Korea did not make it back or came back in bad shape. Don is a member of the Savanna, IL VFW and American Legion in his hometown Fulton, IL.

Draft during the Korean War

From U.S.A. to Europe

​“There were Army bands in Germany, England, France and I think maybe a couple in Italy during that time of the Korean War.  We would play for different situations there in Orleans. Sometimes they would have high officials and generals come to Orleans and we’d have to play our music.We were busy doing something almost every day there in Orleans, giving concerts in the morning and playing for different situations that might be going on in Orleans you see.
There were different things going on at Shape Headquarters in Paris, France. And there were things going on that involved all of Europe as far as the Korean War was concerned. We got involved with playing a few different times in Paris. So, it was what I called  PRETTY GOOD DUTY!

Reflections on the Korean war

“I just thought it was a situation that I didn’t think the United States should get involved with. I thought if North Korea wants to be aggressive and do some bad things to South Korea, they’re going to have to fight their own war over there. That was my opinion and most of us in Fulton had the same opinion. It didn’t affect what was really going on because we were still being drafted and serving. Some of my friends had to go to Korea and some of them didn’t survive very well, that’s for sure.
It wasn’t a popular war, but the United States got involved and we had to make the best of it....... I guess, we here in the United States feel we should get involved because maybe we can do some good with our efforts. That’s the way I looked at it. “

​Message To Those Considering The Military

​ “Sometimes, if I’m not getting good service with something, I like to say to people, “I’m a senior citizen and a veteran with problems, so you should be good to me. Or they should ask, what can I do to help you out? “