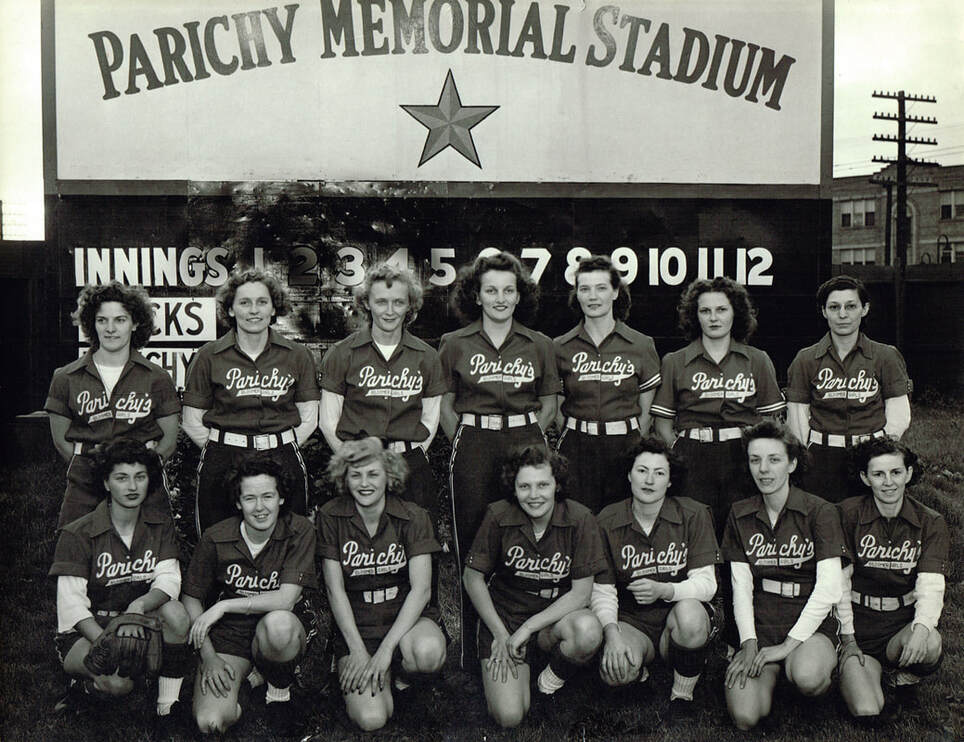 1946
Top - Paulina Pirok Dorothy McKaige, Cachter, Wilda Mae Turned, Pitcher, Ann Pallo, Catcher, Winnie Reed, Tosh Vaugn, Lena Gernic
Bottom - Ricki Caito, Jean Sample, Kay Shinon, Ann Hartnet, Lil Hackson, Irene Chromcik, Mary O’Connor
​
​The Leagues
Forest Park’s women’s baseball teams originated in Boston. The Boston Bloomer team was organized in the 1880s and brought to Forest Park in 1937 by Emery Parichy. The team was part of the National Girls Baseball League (NGBL), which was started in 1944. (Though “National” was in the name, the NGBL only played in the Chicago area. The NGBL differed from the All American Girls Baseball League, which was started the year before and had a national scope (and was featured in the movie “A League Their Own”). The leagues did not play against each other, and they had different rules. The All American Girls Baseball League required players to wear skirts and used the girls’ appearance to promote games. Players signed contracts to guarantee moral and ethical behavior. The NGBL was more about the sport. The league annually drew over 500,000 fans by the late-1940s.

Emery Parichy
The National Girls Baseball League (NGBL)
The league had six professional teams: the Bloomer Girls, the Blue Birds, the Chicks, the Queens, the Cardinals, and the Music Maids.

The teams were owned by Mr. Emery Parichy, who owned a roofing business in Oak Park (starting in 1926). Mr. Parichy eventually became school board president for Proviso High School in Maywood, now Proviso East; president of the Forest Park Library Board; helped start the Forest Park Park District, and was chairman of fund-raising for Loretto Hospital.

The National Girls Baseball League was disbanded in 1955.