By Alexis Ellers and Shannan Evanson
Click on photographs for enlargement
The Forest Park Amusement Park had a relatively short lifespan of only fourteen years, and all fourteen were strife with controversy. To begin, after a few years delay, the Forest Park Amusement Park opened in 1908 under steep resistance from Chicago area church members. (1) The largest concern was its placement located adjacent to Waldheim Cemetery. Protesters are quoted as finding the amusement park a “mercenary scheme showing no respect for the dead, and an utter disregard for the sorrow filling the hearts of the grief stricken.” (2) This was due to rumors that the amusement park would exhume the bodies interned at the local cemetery due to land ordinances. (3) This was publicized in a 1908 Chicago Daily Tribune article titled “Lutherans Fight for Cemeteries.” The article goes on to say that the local churches had prevented a baseball park and a summer garden near the cemeteries in previous years, and would “spend every dollar we can” to do it again. (4) Possibly in part to public scrutiny being so high, and contentious, opening night involved a crowd between 5,000 to 10,000, while the town of forest park only contained 4085 population as of the 1900 census. (5 & 6) While the power outage that occurred later that night was not officially linked to any individual or group, Robert R. McCormick, the president of the Sanitary District of Chicago, cried “sabotage." (7)
​​
​
1. Neil Gale, “The History of the Forest Park Amusement Park,” Digital Research Library of Illinois History (January 16, 2017): 3-5,  http://livinghistoryofillinois.com/pdf_files/Forest_Park_Amusement_Park.pdf (Accessed February 1, 2017).
2-4. “Lutherans Fight for Cemeteries,” The Chicago Daily Tribune LXVII, No. 43 (February 19, 1908): 7.
​5. Jean Louise Guarino, “Forest Park, IL,” Encyclopedia of Chicago. Chicago Historical Society, http://www.encyclopedia.chicagohistory.org/pages/474.html (Accessed February 1, 2017).
6 & 7. Gale, "The History of the Forest Park Amusement Park," 5-6. 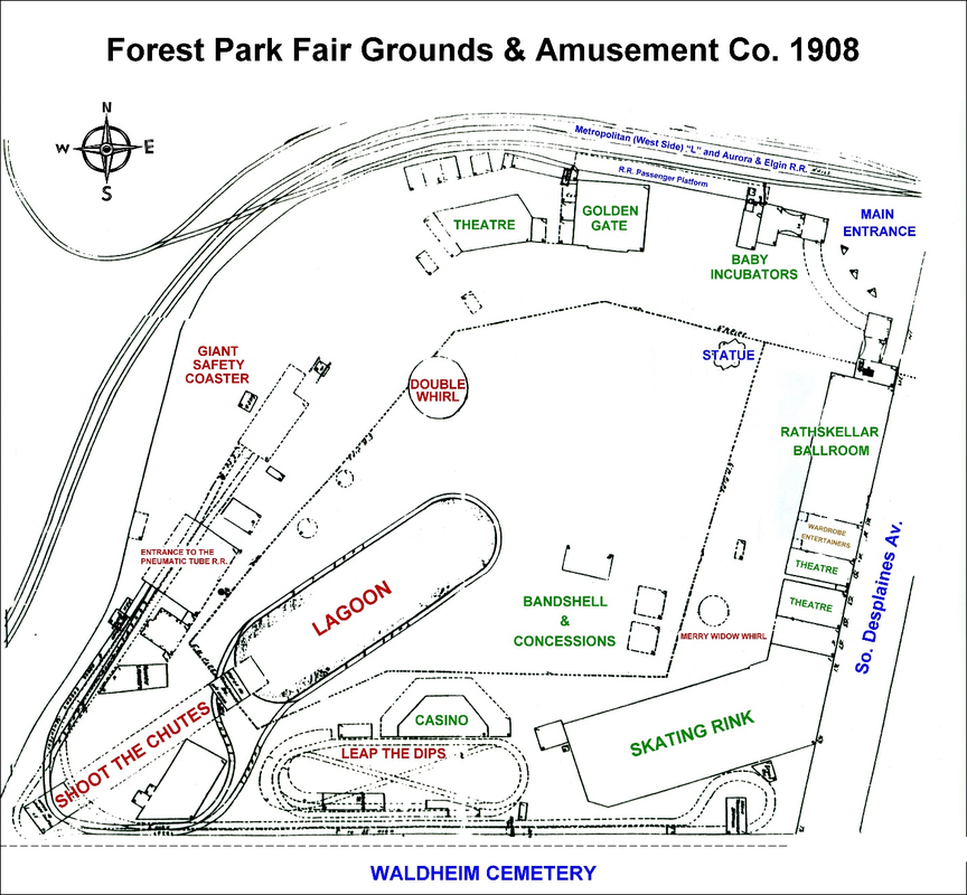 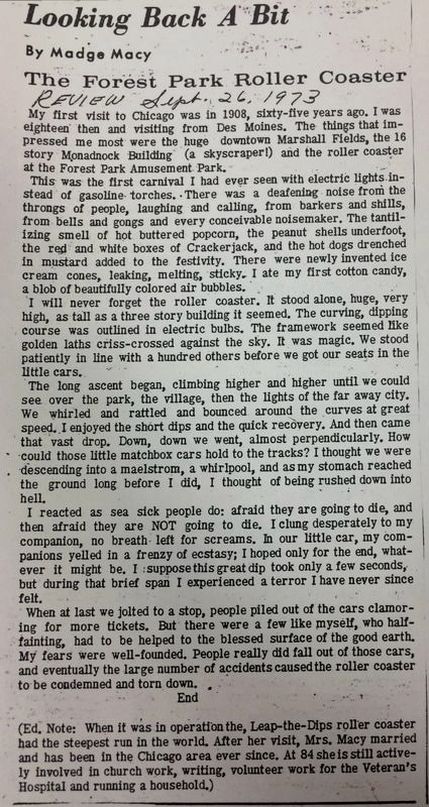 ​There were numerous rides built over the park's fourteen year lifespan, some, such as the Grand Canyon and the Steeple Chase, can be seen below. Like many rides from this time period, and even today, there is a question of safety. For some, that question of safety is even what keeps them coming back for more. While we were not able to find any articles on actual deaths or injuries at the Forest Park Amusement Park, the fear and thrill spread, as seen in the article on the right. Additionally, the naming of such roller coasters as the Giant Safety Coaster seems unnecessarily specific. Though that might have been necessary for the "longest, highest, and steepest coaster in the United States at the time." (10) Additionally, the Grand Canyon, which few rides could match in speed due to its third rail, had a few issues, particularly when it rained. (11) Due to the lack of friction caused by the rain, often the operator had to move backwards and try again until they could get over the hill. (12) In a note written to the Historical Society of Forest Park (below), one individual even mentions how the ride had to be lowered due to fatalities. While we were not able to verify this, the Giant Safety Coaster was remodeled with the advertisement "made as safe as money and engineering ability will permit" in 1911. (13) Whether the danger was real or imagined, the rides drew crowds. Even Dr. Orland, former President of Historical Society of Forest Park, remembers enjoying the roller coasters with his father in the 1922 summer “before its demise." (14) 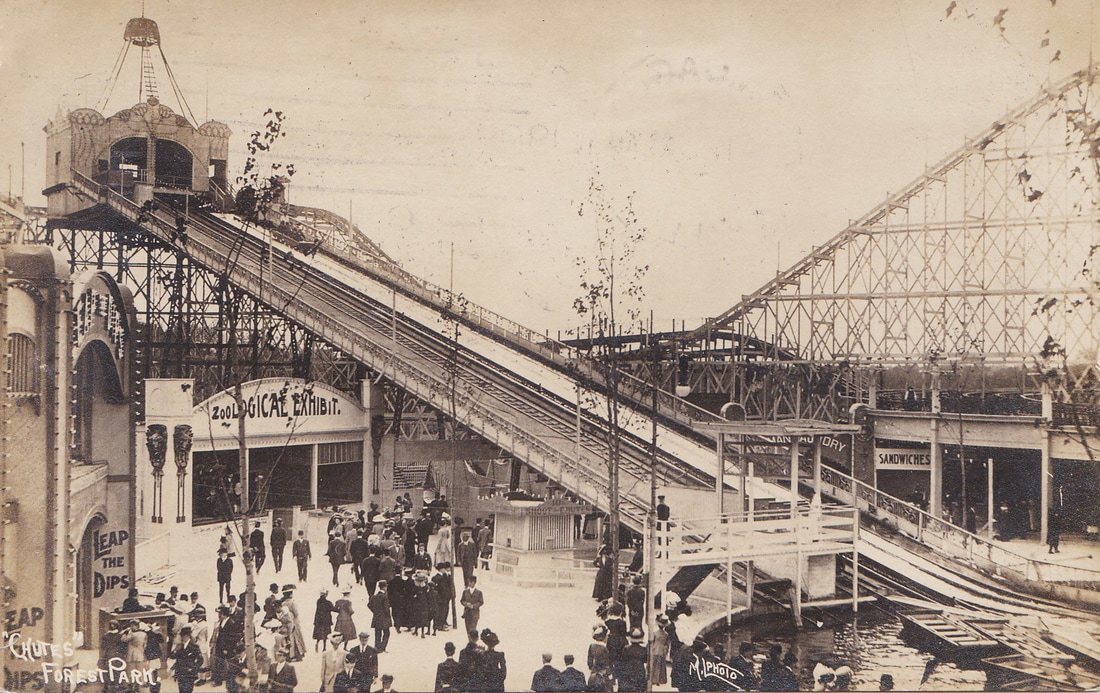 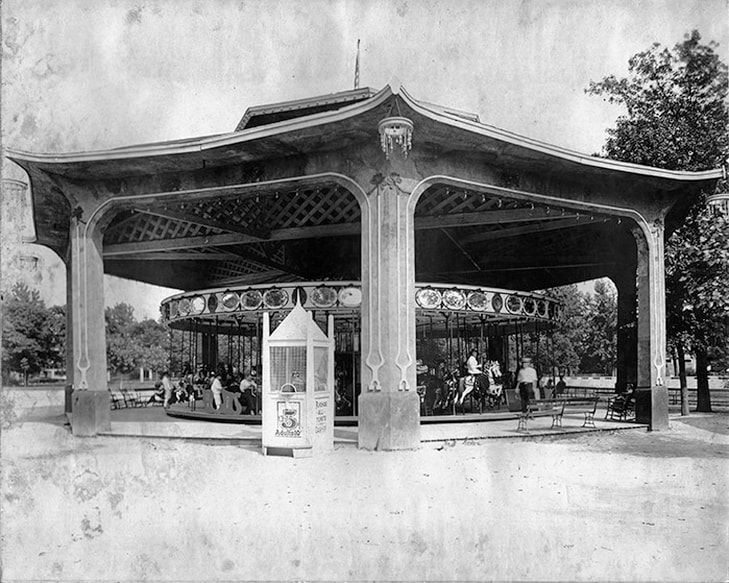 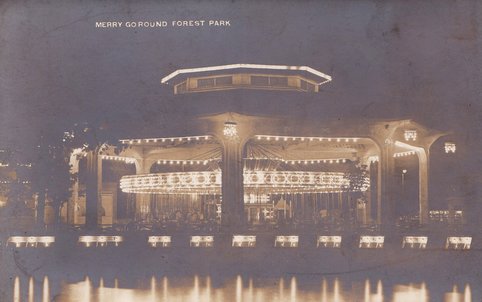 ​Much of the Forest Park Amusement Park shows and rides were sold off, in parts or as complete exhibits by 1923. (15) One ride, in particular, which was in use as late as 2005, is the Grand Carousel. (16) The Grand Carousel was built in 1909, by the Dentzel Company, and by 1923, was brought all the way to Memphis, Tennessee to ultimately be exhibited in the Libertyland Amusement Park. (17 & 18)
​Currently, it is set to open to the public in 2017 after a 5 million dollar restoration that includes the carousel and a pavilion to house the carousel in. It will be exhibited in the Children’s Museum of Memphis, which is an accredited member of the American Alliance of Museums. If you would like to donate to the restoration of the Carousel or find out more about its history, you can find their website at memphisgrandcarousel.org. (22) 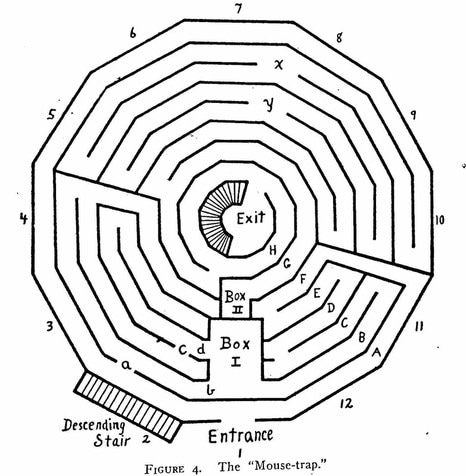 Dr. Perrin's drawing of duodecagonal maze
In 1910, Mouse trap, which was later renamed to Iron Maze, was built. (23) In 1914, Dr. Perrin, instructor in Psychology at the University of Pittsburgh, published an experiment that heavily involved the Iron Maze.  The experiment involved two mazes, the “pencil” maze and the Iron Maze, which was physically walked. (24) His students, used as test subjects in the experiment, were blind folded and were asked to successfully traverse the maze. (25) If they were able to take the shortest route three time in succession without any errors that the maze was “deemed learned.” (26) The experiment was made to “determine whether or not different learning processes were involved in the two-mazes calling for different kinds of physical technique." (27) The Historical Society of Forest Park contains a copy of the full experiment, if any interested individual would like to make an appointment to see it in person. ​ 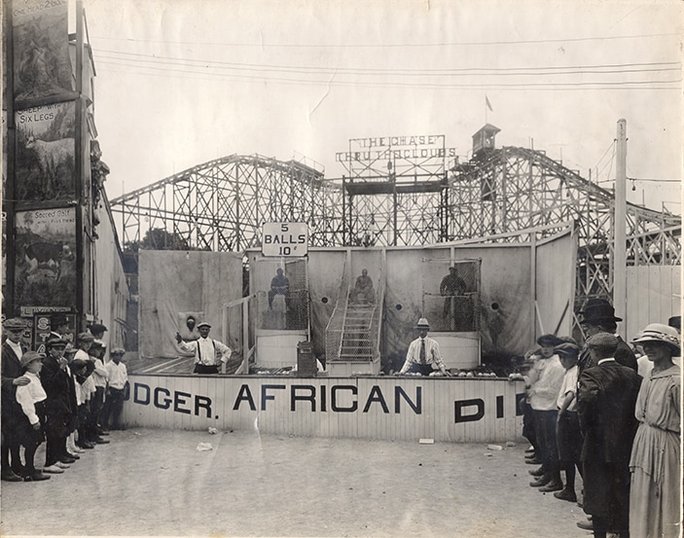 Forest Park Amusement Park included such games as the African Dip and the Diana Game. Both involved the dunking of individuals for sport. The Diana Game (not pictured) drew especially large crowds due to the revealing end result. ​(28) 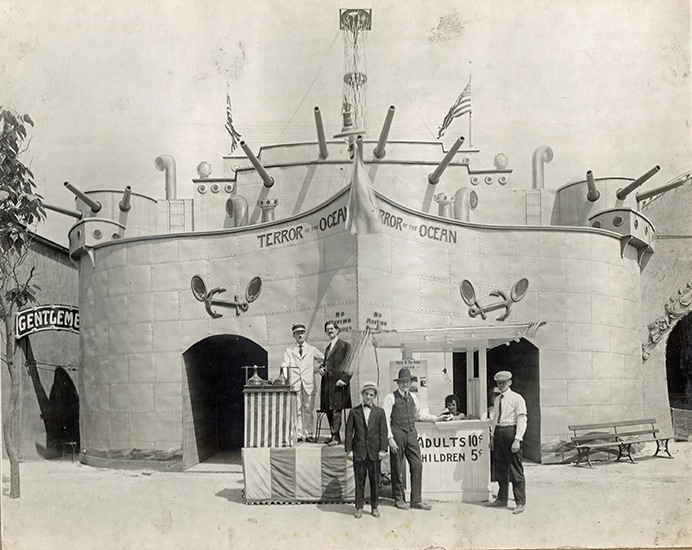 You can see examples of World War I's effect on the American population through the entertainment brought to the Forest Park Amusement Park during the 1914 to 1918 time period. For example, two years into World War I, one of the attractions of the park was changed from the Fun Factory to A Trip to the Kaiser’s Lantern. (29) By World War I’s last year the U.S. Recruiting Bureau had a permanent center near the entrance of the amusement park. (30) There were even marines actively driving through the park with a cannon to garner more recruits. (31) A new, but popular, game that same year was Kill the Kaiser. This involved “knocking the heads off life-size figures of ‘America’s enemies.'" (32) An amusing anecdote for the game came from a young man named John Sheppard, who, upon seeing the game, “shouted ‘Over the Top!” before attempting to pummel the Kaiser and the German Crown Prince Wilhelm. (33) Other featured shows that could be categorized as propaganda includes the show called Terror of the Seas (pictured above). This involved an avenging battle between a U.S warship and a German submarine after it sank a peaceful medical ship. (34) The U.S. warship, naturally, came out the victor. (35)

In the fourteen years that the Forest Park Amusement Park remained open, there were numerous shows. They included bands, dancers, contests, freak shows, reenactments, animal exhibits, silent movies, and more.
​
There were many individuals associated with the Forest Park Amusement Park, such as Paul Heinze, who climbed the ranks of the park, and Ralph O’Hara, who was an interesting character within the park's demise. The most noteworthy gentleman involved with the amusement park was Paul Howse. He only stayed at the park for one year, but in that time he created the Giant Safety Coaster, the Steeplechase, the Grand Canyon, and the Human Roulette Wheel, which are some of the most famous, and lasting rides for the park. (36) His investment in rides came from a fairly discerning idea for the future of amusement parks. By 1906, he saw the Roaring Twenties coming and felt that the thrill seeking lifestyle inherent to the time made “[r]iding devices stand the wear and tear of years”, unlike shows and games. (37) Due to this foresight, he found working on Chicago amusement parks frustrating. To him, there was no room for true growth, in the form of rides. (38) This caused him to gravitate towards the newly made Forest Park Amusement Park in 1909. One of the only shows he did add was the Reign of Fire, shown above. It had a “damsel in distress” rescued from a burning building, which seems to still fit the thrill-seeking desires of the age. (39) Sadly, for him, 1910 came with more and more shows, which, as the Living History of Illinois and Chicago journal theorized, was the likely reason for his departure that same year. (40) 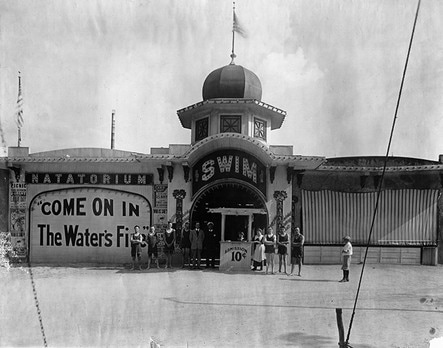 The fire that took place on July 25, 1918 is just another example, in a long list, of the park's unfortunate luck. The heated swimming pool's boiler room, shown on the left, was the source of the fire. The fire then quickly spread to the power and lighting station. This left the firefighters not only without the nearest source of water, but also without power. Several hours later, with 1/5th of the park destroyed and the fire not yet extinguished, the Forest Park Amusement Park made an  announcement...It would be reopening that very same day in just half a dozen hours. Below you can see the local paper's front page article on the fire. In the following years there were additional fires, that while not damaging, left park officials suspicious of the origin of the 1918 fire. (41) 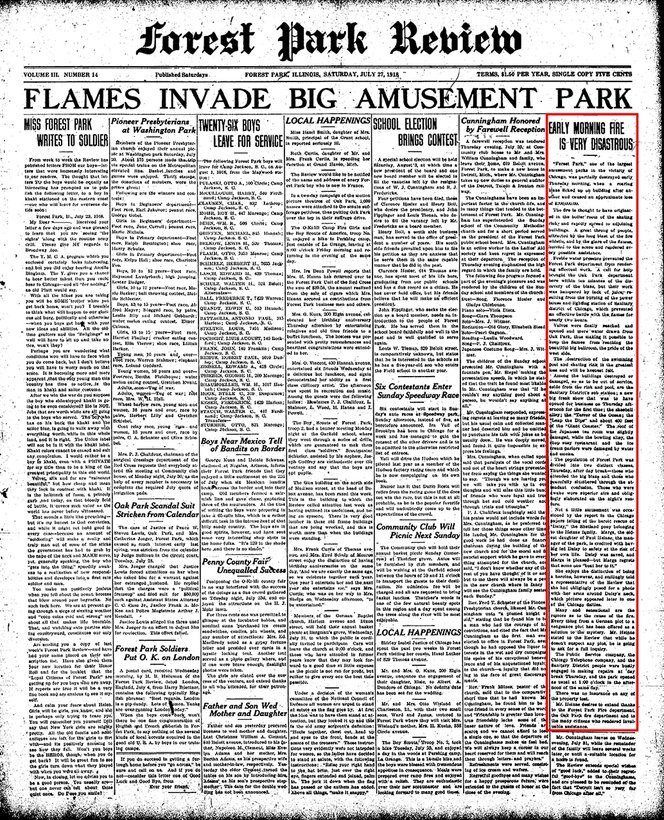 On opening day of the Forest Park Amusement Park Exhibit, April 10, 2017, the Grant White and Field-Stevenson Schools 4th and 5th grade class will showcase their project. This includes a handmade photoboth set. Visit their website to learn more about their project. The photographs in this slide currently include those made in the early 1900's, and will soon include those made on the day of the exhibit. Enjoy!